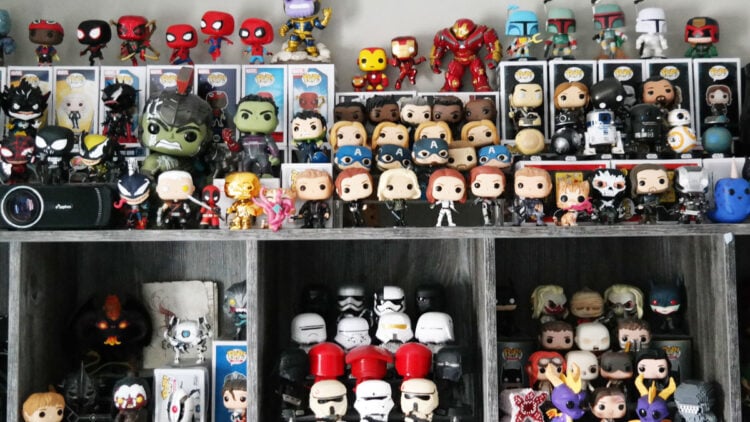 You’ve got some, we’ve got some, everybody’s got some. We’re talking Funko Pops. Specifically, the most expensive Funko Pops that have collectors going nuts:

Each of these top-25 goes for four-or-five figures. And some are regularly listed for six figures… (unsold).

So, whether you’re a big fan of Funko, a hustler after $$$, or someone just curious as to what is the rarest Funko Pop, these are the top-25 Most Expensive Funko Pops right now:

Valued at $1,140, Mickey Mouse as Steamboat Willie made his debut in 1928. The Steamboat Willi POP vinyl from Funko Pop is perfect for anyone who’s a fan of the original cartoon. This silver metallic figure is 9 inches in size.

Mickey Mouse first appeared in this short cartoon film titled ‘Plane Crazy,’ which was also released in 1928, though it was the success of Steamboat Willie that established the career of Disney’s famous mouse.

Hailing from the 1970s, this is one of the best-selling Funko Pop versions of the King that shook up all the sellers and buyers. This cute little Elvis Presley Funko Pop is wearing the iconic white jumpsuit and cape. The idol is worth over $2,000. What’s more, the figure even glows in the dark.

Though the Green Lantern movie might not have been a massive hit, Hal Jordan and his power ring have become formidable opponents for the collectors of Funko Pops. This version of the glow in the dark Green Lantern was unveiled at the 2010 San Diego Comic-Con and has continuously sold for well over $2,000 since then.

For all DC fans out there, this is a Hot Topic exclusive that was never made available to the public. This elusive Funko Pop Batman figure in silver was given to a handful of chosen Hot Topic employees, and only 108 figures were ever manufactured. This has made this Batman silver figurine one of the rarest Funkos ever to be produced. One of these figures was sold for $2,500 in 2020.

This is Funko Pop’s own rendition of Frankenstein from Freddy and launched at the 2019 San Diego Comic-Con. This cute monster figure is available in two forms. There is a non-glowing version, of which only 350 pieces were made, each costing around $610, and the glow in the dark version, of which only 24 pieces were manufactured. Recently, one of these glow-in-the-dark monster figures sold on eBay for $3,000. The Frankenstein Funky Pop is valued at $3060.

CHECK OUT: 5 Simple Tips For Building An Action Figure Collection

This is a limited edition chase variant of Jimi Hendrix with a purple bandanna. The demand and price for this variant of Funko Pop have been steadily on the rise since 2014, and it is valued at $3,080 today.

Valued at $3,120, this is believed to be the most expensive Star Wars Boba Fett figure. This Freddy Funko version is so valuable because only 24 pieces were made. The red hair variant is said to be worth the most, but the auction figures for the green-haired variant are also listed in the range of $2,000 to $3,500 on eBay.

This rare Tony Stark Freddy Funko Pop is valued at $3,500. This is also a coveted piece Funko as only 12 of them were made, making it difficult to find. While the value of this Avenger Funko Pop stands at $3,500, it constantly has a much higher listing price.

From the Funko Pop stable is another cute version of Frankenstein. This time it is Frankenstein meets Freddy Funko. This toy immediately became coveted, with the cute pink Freddy/Frankenberry mashup selling for over $4,400.

This is a representation of Freddy being turned into the iconic Bob’s Big Boy statue from Bob’s restaurant at the 2019 San Diego Comic-Con. The figure was launched in two variants, one with Freddy wearing a blue apron and one with Freddy in a red apron.

There were 12 models of the blue apron variants made, while 520 figures were made of the red apron variant. The figures skyrocketed in value immediately after its launch, with one toy selling for $4,850 in December 2020 after a long drawn out 23-bid bidding war on eBay.

CHECK OUT: The 9 Vintage Coke Bottles That Are Worth Money

Great news for fans of the TV show ‘Stranger Things’ – the Funky Pop figurine of Hopper, the grumpy and grizzled cop from the famous show, is today worth well over $3,000. This rare Funko Pop is a relatively new release. The figure was first showcased in 2018 at the San Diego Comic-Con, and quickly became a valuable collectible.

The estimated value of the Golden colored Hopper figure is $2,240, which often keeps increasing. There are two listings on the Pop Prices marketplace for this Gold Hopper – one for $3,700 and the other for $4,900.

Funko Pop’s gold version of the classic Disney character Dumbo jumped in price. The figure is based on the original Disney movie from 1941 and not the latest 2019 Tim Burton version. Sales for the Dumbo figure soared from $710 in 2014 to reach $3100 in 2018. One eBay listing even has the idol listed for $5,050.

Your favorite motorcycle riding demon from hell received his very own Funko Pop figurine. This metallic version of the toy features a grimacing Freddy, wearing the signature chains and motorcycle jacket of Ghost Rider. The figure was released in 2013 at the San Diego Comic-Con as an exclusive product. In 2016, one of these figures sold for $5,600.

There were two types of Apollo Creed figurines that were made. One was with bruises and the other one without bruises. There were 96 pieces manufactured of Apollo Freddy with bruises, but only 12 without the bruises. The bruised edition is also rare, but not that rare that it is never available for sale. At present, one such piece is being sold on eBay for $2,000.

Nevertheless, the unbruised Freddy Apollo Creed figurine is a very rare collectible. In fact, most people have never even seen it. One such toy sold for $6,000 in December 2020.

Count Chocula managed to beat out Boo Berry and Franken Berry both in the cereal-based popularity war, at least when it comes to the Funk Pop universe. The character is based on the much-loved commercials kids loved from the 70s, 80s, and 90s. This metallic version of Freddy posing as Count Chocula has sold for a high price of $6,100.

This is another expensive variant of Disney’s 1941 movie Dumbo. The toy is based on the scene where Dumbo was forced to act in a circus and escape a burning building dressed up as a clown. The clown Dumbo figure launched at the 2013 San Diego Comic-Con exclusive. The highest listing for this figure was at $6,000 on eBay towards the end of 2018.

This famous chrome red version of Stan Lee the superhero is a coveted Funko Pop that is so rare that there are very few pictures available of this:

Only 12 figures were ever made, and they almost never go up on sale. The last evidence of this figure on sale was in an archived eBay post. The figure is valued at $7,290, but it is so rare that many people doubt whether it even exists or not.

This Venom Freddy Funko was a Funko Fundays exclusive launched at the 2019 Comic-Con. Only 24 such figures were made, and they are quite challenging to find. According to some, they were handed out in Funday mystery boxes during the Comic-Con that year. This figure is valued at $7,500.

Another Buzz Lightyear collectible Funko Pop finds itself on this list. This is a metallic version of Freddy Funko as Buzz Lightyear from Pixar’s Toy Story and it is known to have sold for between $5,700 and $6,500. Looking at this trend, the average sale price for this figure is expected to only go up. One of these was recently on sale on eBay for $10,000.

This Freddy Funko is very rare. And you are unlikely to ever see this figure go up on sale. According to sources, only one such figurine has been sold in the last two years, and that was for a whopping price of $10,000. These figurines were issued in 2011, and only 12 pieces were ever made.

CHECK OUT: 9 Most Expensive Rookie Cards Ever – Includes NFL, NBA, MLB, and NHL

This is one Funko Pop that is mighty expensive. Often just known as ‘A Clockwork Orange,’ this Funko is modeled on Stanley Kubrick’s vision for Alex DeLarge, which produced the famous and frightening youth clad in white having an affinity for ultraviolence. This glow-in-the-dark version is the most coveted toy, but even the regular Alex figure is worth quite a lot. This figure is valued at $13,300.

The glow-in-the-dark Boo Berry is considered to be one of the top ten catches amongst Funko Pop collectors. The Pop Price Guide lists this little blue ghost for an average price of $3,450, but the last time one of these figures sold was for a whopping $7,900 in January 2018. There is also another one at sale online for an eye-popping price of $15,000.

In this Funko Pop, Freddy makes an appearance as a bloody Jamie Lannister from the hit series ‘Game of Thrones.’ This is a limited variant that hails back to the 2013 San Diego Comic-Con. It can fetch even double its average price tag of $9,300. In fact, one listing on eBay sold for $20,000 in 2019, while another sold for $13,500.

And finally, the rarest Funko Pop right now is…

After the passing of the legend, Stan Lee, in late 2018, many items related to him have gone up in value. The autographed chrome and gold metallic versions of Superhero Lee are trending for astounding figures of $100,000 to even $120,000 on eBay. A single signed metallic version was being sold for $18,000, while the unsigned, regular gold version is only for $155.

CHECK OUT: The 10 Most Expensive Non-Fungible Tokens (NFTs) So Far