Marvel vs DC: The Most Successful Movies From Each Studio

It really does seem that Marvel vs DC saw out the last hay-day of modern cinema. Especially as box office numbers are struggling to sustain what was once one of the most popular pastimes.

With movies getting less box office time and hitting streaming services quicker than ever, we look back to see what the most popular movies from the MCU and DCEU were:

(Our popularity is measured on box office numbers only)

Disregarding inflation, the biggest Marvel box office – and also the biggest box office in the history of cinema is “Avengers Endgame“, directed by the Russo brothers.

It cost approximately $356 million to make, which is massive. Yet it has made $2.79 billion overall and is a sign of the movies popularity (and the audience Marvel has).

This is the benchmark all other comic book-inspired movies will be compared to. With its huge earnings and an amazing rating of 8.4 on IMDB.

CHECK OUT: The 5 Most Expensive Comic Books Ever.

For anyone who hasn’t seen Spider-Man: No Way Home, go find it right now and watch. It has amazing cameos and offers the best multiverse story to date.

In terms of box office earnings, it earned a whopping $804 million, with an opening of $260 million, which is second to only Endgame’s ($357 million).

The movie earned a fantastic 8.3 on IMDB and is one of the best movies on this list.

Fifth on the list of highest-grossing movies in history is “Avengers Infinity War”.

(Yes, we were surprised too).

And that surprise isn’t because the movie is bad, in fact, out of the entire Marvel Cinematic Universe, it is our favorite because it leaves the biggest cliffhanger:

And we’re not alone in thinking it is a good movie – it earned a rating of 8.4 on IMDB just like “Avengers Endgame”.

The movie cost $321 million and grossed $2 billion worldwide, making it the second highest-grossing film in the Marvel Cinematic Universe.

The other top-10 Marvel box office grossing movies are: 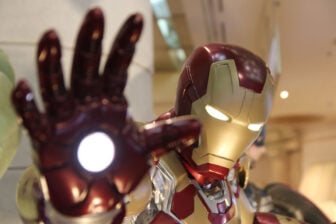 (Not including stand-alone movies or the Christopher Nolan Batman trilogy)

“Wonder Woman” walked a tightrope between great action and comedic fun, and by doing this, director Patty Jenkins’ “Wonder Woman” made the second-highest rated DC Universe movie – behind “The Joker”.

Wonder Woman earned a rating of 7.4 on IMDB.

Yet, despite being a better movie than most of DC Universe’s recent efforts, its box office didn’t reflect that. Earning $412 million worldwide, less than the broken “Dawn of Justice”.

The highest-rated DC Universe movie is “The Joker”, which earned $335 million at the box office and a whopping 8.5 rating on IMDB…

CHECK OUT: 5 Comic Book Villains That Started As Nerds.

Directed by James Wan, “Aquaman” was released in theatres in 2018 and tried to replicate the action-comedy Marvel was delivering in its Cinematic Universe.

For extra appeal, it starred an actor with a growing fanbase, Jason Momoa. From Khal Drogo in “Game of Thrones” to Declan Harp in “Frontier” and Baba Voss in “See”:

Yet, it still only managed a 6.9 rating on IMDB.

Aquaman cost $160 million and grossed $335 million at the box office.

From script holes to Jesse Eisenberg’s Lex Luthor’s characterization, this movie was picked apart once it was released:

Whatever DC’s plan was when it came to their Superman, Batman, and Justice League adaptations, it didn’t resonate with fans.

Perhaps after the amazing Batman trilogy from Christopher Nolan, expectations were set too high by fans?

Regardless, the movie only managed a rating of 6.4 on IMDB. Yet, it still grossed $330 million at the box office after costing $250 million. The other top-10 Marvel box office grossing movies are:

In the Marvel vs DC battle, Marvel definitely wins at the box office.