One of the best movies on the list for comedy and monsters in the same film. Bela Lugosi returns to play Dracula, and Lon Chaney Jr. plays Wolf Man. Who wouldn’t want to see Abbott and Costello interacting with Dracula, Wolf Man, Invisible Man, and Frankenstein’s monster? Kat and her father, Dr. Harvey, are hired to drive four ghosts from a mansion with a secret treasure. Three of the ghosts are determined to conquer their human rivals, but luckily for Kat, the fourth ghost, Casper, is the “friendliest ghost, you know.” Trivia bonus: this movie has a cameo with a character from another movie on this list. Blink, and you’ll miss it! Miguel longs to be a musician, but his family honors a generations-long ban on music. When he accidentally enters the Land of the Dead, he seeks out an ancestor to finally solve the mystery of the music ban. Coraline moves into a new home but finds a secret passage to an alternate world, where the people have buttons for eyes, and a sinister “other mother” wants to take Coraline’s soul. Coraline has to find the strength to save her family and escape back to her ordinary world. How do you hide an alien you have befriended while trick or treating on Halloween? This is a Gen X classic, so it’s time to share it with your kids if they have somehow missed it so far.

Besides giving us a cute and young Drew Barrymore, the movie put Reese’s Pieces officially on the map. How could your kids live through this world without recognizing the iconic phrase ” E.T. Phone Home”? Three hundred years after being executed for witchcraft, the three Sanderson sisters are accidentally brought back to life by Max. It’s up to him, his little sister, and girlfriend Allison to save everyone in Salem from the witch sisters on Halloween.

Having a rebirth of lately with the invention of streaming, you’ll want to make sure this classic is in your kid’s Halloween collection. 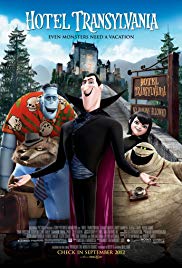 Dracula’s teenage daughter, Mavis, lives with him at his resort for monsters and ghouls in Transylvania. But when a young human named Jonathan appears on Mavis’ birthday weekend, she has her first crush. Dracula uses all of his powers to prevent them from falling in love.

The only TV movie on the list. Charlie Brown navigates his somewhat clumsy social life, while his pal Linus longs for a visit from the Great Pumpkin. It’s just not the Holidays with the Peanuts gang.

What if an entire house is a living, breathing monster? Three teenagers try to stop an evil house from eating the trick-or-treating kids on Halloween night. Eggs is a human boy raised by the Boxtrolls, little trash-collecting creatures who live below the city. When the evil Snatcher hatches a plan to exterminate all of the Boxtrolls, Eggs must go above ground to save his family. Bored with Halloween, Jack Skellington discovers Christmas and wants to bring it to Halloweentown. Despite his best efforts and assistance from love-smitten Sally, Jack makes a mess of things and needs Santa Claus himself to set things right.

Sure it’s Christmas themed, but this spooky movie will be the perfect complement to your Halloween movie party. Wallace and his ever-loyal dog and companion, Gromit, run a humane pest control business. A mysterious creature is destroying the town’s vegetable crops ahead of the annual vegetable-growing contest. It sounds like a job for Wallace and Gromit. What can go wrong when an obsessed scientist brings the dead back to life? Maybe the granddaddy of all horror movies, this one still holds up all these decades later. (This is not for younger kids. While not shown on camera, the monster does throw a little girl into a lake, and we find out later she drowns.

Despite its subject matter, it is still quite tame by today’s standards, and kids might not even notice the drowning incident). Something strange in your neighborhood? Call the Ghostbusters!

This 1980s-era classic might have dated, stop-motion special effects, but it works for kids and adults with humor and just enough scary stuff to keep everyone interested. T

his one is in the tweeners category because of some strong language and sexual situations. Teenager Zach develops a crush on his next-door neighbor, Hannah, but there’s only one problem. Hannah’s dad happens to be horror author R. L. Stine, who secretly keeps all his literary monsters locked away safely in his manuscripts.

Guess who has to round up all the monsters after they are accidentally released to terrorize the town?

It might be too scary for the younger kids due to intense action sequences where characters are being chased by scary creatures. Eddie Murphy plays a real estate agent who drags his wife and two children to a remote swamp to check out a mansion that is for sale. Spending one night there can’t hurt anyone, right? Right?

On the tweeners list, because some of the effects and imagery might be too intense for younger viewers. Norman can talk to the dead, but only his new friend Neil believes him. Norman finds help in an unexpected crew of friends and the real truth behind an evil curse that threatens the town.

The final climactic scenes might be a little too intense for the younger ones due to the loud sounds and bright lights. After a nasty breakup two years earlier, the Mystery, Inc. gang goes to Spooky Island to—you guessed it—solve a mystery. Despite their differences, they realize they work best as a team.

Nostalgic parents will also enjoy this new ‘tail’ from the legendary Scooby-Doo gang.

This is in the tweeners list because it does have some special effects that might be too scary for the younger kids. The devil himself owns a carnival, and when it comes to town, people tend to have all their dreams come true in exchange for their souls. Can two friends save everyone before the carnival leaves?

This is in the tweeners list because it does have some dark imagery and an overall sense of dread throughout the movie that is too intense for younger viewers. What do you do if you die as a couple, reside in your home as ghosts, but hate the family who buys and moves into your house? You hire a human-exorcism specialist named Beetlejuice, played brilliantly by Michael Keaton. Say his name three times at your own risk.

This one has scenes that are too scary for the younger kids as well as strong language. This classic examines one simple question. What might go wrong if an entire neighborhood is built on top of a cemetery? (Some of the sequences are too visually intense for the younger kids). 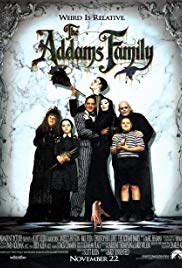 The plot doesn’t matter. This movie is all about the characters from the cartoon and TV show. Spot-on casting and seamless effects illuminate the macabre daily lives of Gomez and Morticia Addams, plus their creepy and kooky relatives.

This one is for the older kids due to sexual innuendo, dark humor, references to torture and weaponry, and mean-spirited behavior by kids. Even for older kids, you might consider previewing it. A monster-loving kid and his misfit friends must band together and protect their town and each other from Dracula, Frankenstein’s monster, The Creature from the Black Lagoon, and the Wolfman. (This one is for the older kids due to strong language and some violence beyond what might be considered acceptable for younger kids). 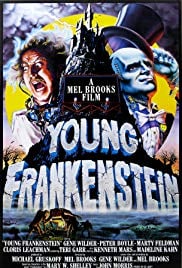 This hilarious Mel Brooks classic pokes fun at the old black and white monster classics. A descendant of the original Dr. Frankenstein returns to Transylvania and re-animates his own monster, to hilarious results.

Highlight: The best scene (Below) by far is the monster dancing to the song “Putting on the Ritz.”

Sexual innuendo definitely exists in this movie, but most, if not all of it, seems to escape the kids — also, some profanity.

Did we miss your favorite Halloween movie for kids? Leave a comment below…