Everyone knows the internet is run by cats, which probably explains why it can be such a feral place at times. It only makes sense then that our feline overlords demand representation in your favorite movies and TV shows. Here’s a list of 10 cats from sci-fi, fantasy and pop culture that, if they wanted to, could totally take over the world. There’s no denying that Jonesy was one tough cat. The chief rodent catcher of the USCSS Nostromo he was the only creature to survive the ship’s Xenomorph attack other than Ripley. Jones was your typical lazy orange tomcat in a lot of ways, but don’t that fool you. He had way more than his allotted nine lives and that alone makes him a formidable cat. Spot, another lovable orange tabby, was the beloved pet of Data aboard the USS: Enterprise. Spot was often seen trying to get Data’s attention and he tried many ways to train her, but as Geordie observed, it was actually Spot who was training Data because he spent so much time and attention giving in to her demands.

If a cat can train an android just imagine what else she could do. Spot could have totally taken over the world and the wider universe, but thankfully, she preferred to stay in Data’s quarters and let him fuss over her. 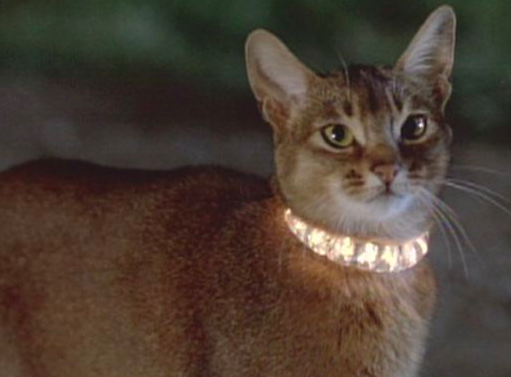 When this sleek Abyssinian’s ship makes an emergency landing on earth he is taken in by scientist, Dr. Frank Wilson. Jake, whose actual name is Zunar-J-5/9 Doric-4-7, follows Frank to his office where he is working on figuring out the secrets of Jake’s ship. Jake finally reveals his true nature to Frank by speaking to him using a special collar that amplifies his telepathic abilities.

In the final scene, Jake is granted U.S. citizenship and allowed to stay on earth as a friendly representative from another planet. Thankfully he was sociable. Imagine what a cat with a collar that gives him telepathic and telekinetic abilities could do if they really wanted to. This beautiful black cat saves the day several times helping two orphaned children named Tony and Tia escape from a group of people who are trying to hunt them because they are actually aliens. He saves the kids from bullies and aids their escape by helping them befriend a drifter named Jason O’Day who eventually gets them to safety.

There’s nothing supernatural or alien about Winkey himself but he’s highly intelligent. In the end, the kids choose to leave him behind with the drifter once they know they are safely on their way back to their home planet. Perhaps they did this so O’Day would have something to remember them by, or perhaps it was because they knew a cat this smart might actually pose a threat to their civilization by trying to take over. We’ll never know. 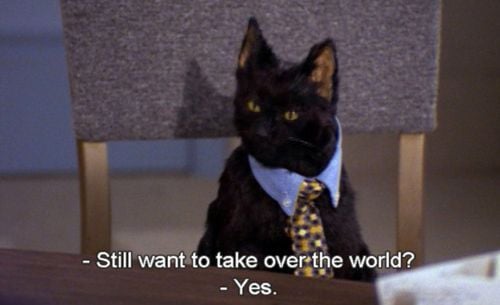 Another black cat with above average intelligence, except this cat isn’t actually a cat at all. Salem is a 500-year-old witch who was sentenced to live 100 years as a cat by the Witches Council for trying to take over the world. Although all 100 years as a cat will do is give him more time to think about how to take over the world once he’s set free again, and now he’ll have thought about it with his cat brain. God help us all. This pure white fluff ball doesn’t do much other than lay in Dr. Evil’s arms as he strokes him and talks about world domination. It seems like a pretty harmless cat, right? Wrong! Mr. Bigglesworth is just playing possum. He’s been privy to all the evil plans and ideas and is probably sitting there thinking of ways to improve them with his superior cat brain. I think it’s time for another Austin Powers movie. Austin Powers and the Battle of Bigglesworth. We’d pay 15 bucks to see that! In this 1970 Disney classic, Marie is an adorable white angora kitten who likes to sing and act like a lady. She’s not averse to getting her paws dirty, however. Marie’s philosophy is: “Ladies don’t start fights, but they can finish ‘em.” Hey, she’s not wrong! We can think of a few politicians that could use a good scolding from a fancy kitten.

A pink mountain lion who wears a string tie and shirt cuffs with no actual shirt is probably a psychopath. Someone should check his basement immediately.

9. Scratchy: Itchy and Scratchy (The Simpsons) A cat can only be chopped, julienned and blown up so many times before he gets sick of it and decides he’s had enough. Itchy may always get the better of him but god help him if Scratchy’s luck ever changes.

Do you have a favorite cat who could take over the world? Tell us who it is in the comments below…