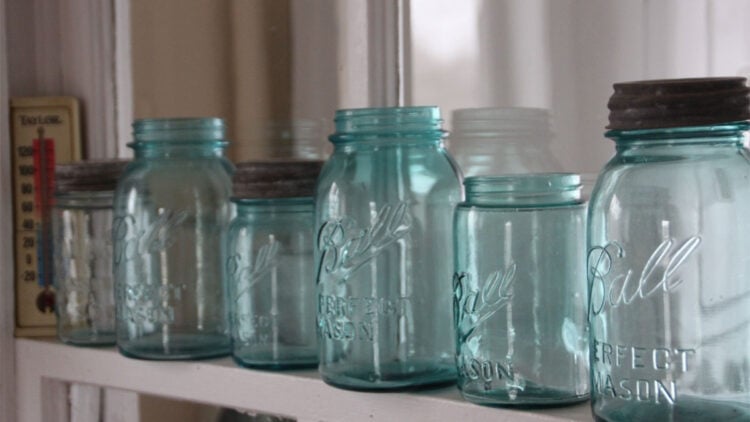 We love vintage collectibles, everything from watches to sports cards. However, the world of mason jars was new to us – but when the most valuable costs a massive $23,500 we had to dig deeper:

What we found while researching the five most valuable mason jars, is that these are history trapped in glass, from its embossing to inventive fastenings.

The most valuable mason jars are:

The Willoughby Stopple Jar was invented in 1858 and had a unique cork lid. The Jar is an antique piece, with few coming up for sale in preserved, or complete condition.

Due to the scarcity, even if you manage to find one, the price tag might make you gasp. Online prices of this jar vary between $500 and $1000. The cork lid (stopple) alone could cost you $60.

Manufactured in 1870, this Mason jar is made up of clear glass, including the words “The Chief” embossed on one side, and the letter “K” embossed in cursive on the other side.

The jar uses a wire fixture on the underside of the lid that hooks onto the sides to seal it. It is a rare jar and very difficult to find. The price of The Chief Mason Jar in good condition is around $800.

There are two types of Ball upside-down Mason jars. The first kind was produced as a result of a mistake (manufactured in 1933), and the second was produced intentionally to work as a dispenser.

In the first kind of Ball upside-down jars, the glass embossing was set upside down – with the company only producing 12 such jars by mistake. This rarity makes them extremely rare – expect to spend around $1,000 today to own one.

CHECK OUT: 6 Ways To Identify A Valuable Vintage Pepsi Bottle

The Black Amber Magic Star fruit jar was manufactured in 1886 and has a distinguishing dark color. One of these jars in good complete condition could cost around $3,000 to own.

The jar features a glass lid that is secured with an iron clamp, which at the time was an innovative way to seal jars back in 1886. The jar was patented in Pennsylvania in 1886 by Hermann Buchholz and was later produced by a glassware company McCully & Co.

While the jar was produced in many colors, the black version has become extremely rare, hence its value. However, if you’re looking for one, know that no Black Amber Magic Star fruit jar has ever been seen for sale…

No. That isn’t a mistake. The Van Vliet improved jar really does cost five figures.

Invented in 1881, the Van Vliet Improved Jar has a distinguishing feature, a wire is attached to the lid by hooking to the bottom of the jar. This was an attempt to improve the jars sealing properties.

The jars scarcity drives the price, as only a few exist today. And this is because the Van Vliet factory was burned down in 1885, taking many of its jars with it.

CHECK OUT: 5 Vintage Coke Bottles That Are Worth Good Money